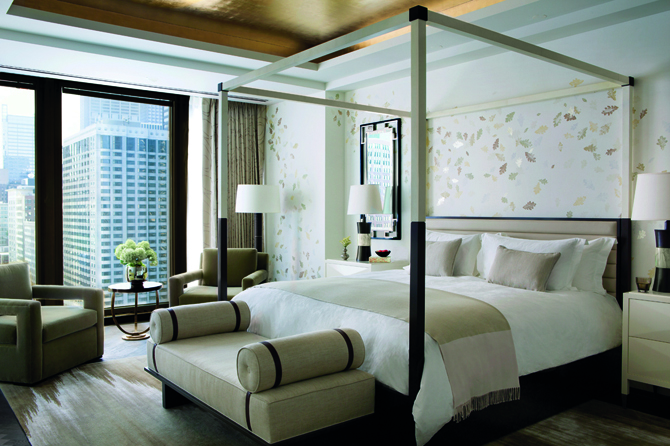 Richmond has been nominated as a Gold Key Award finalist in the ‘Best Guest Room Luxury’ category for their work on the iconic Chicago Mies van der Rohe tower, now turned in to the Langham Hotel. The annual Awards, now in the 34th year, celebrate excellence in hospitality design worldwide.

With 19 categories, the Gold Key Awards acknowledge the ideas and concepts that are changing every aspect of hospitality interiors and commend the creative minds responsible for innovation and excellence in their respective fields.

Richmond spearheaded the bulk of Langham Chicago’s design work encompassing the guest rooms, suites, public spaces, meeting rooms, health club and signature Chuan Spa. The interiors are in character with Langham’s traditional design sensibility yet set in a Mid-Century modern building, designed by Mies van der Rohe. Clean and simple lines complement the building’s exterior and are combined with rich materials to offer a soft modernity throughout the hotel, resulting in a calming, relaxing and luxurious environment.

The hotel has 316 guestrooms including 48 suites. The Langham’s luxurious guestrooms and suites offer a signature Blissful Bed as well as Botticino Fiorito marble and Travertine bathrooms. These are among the largest in the city and boast magnificent views towards Lake Michigan and of the Chicago River, and the stunning surrounding cityscape.

The Gold Key Awards will be presented on 10 November at the Mandarin Oriental in New York.