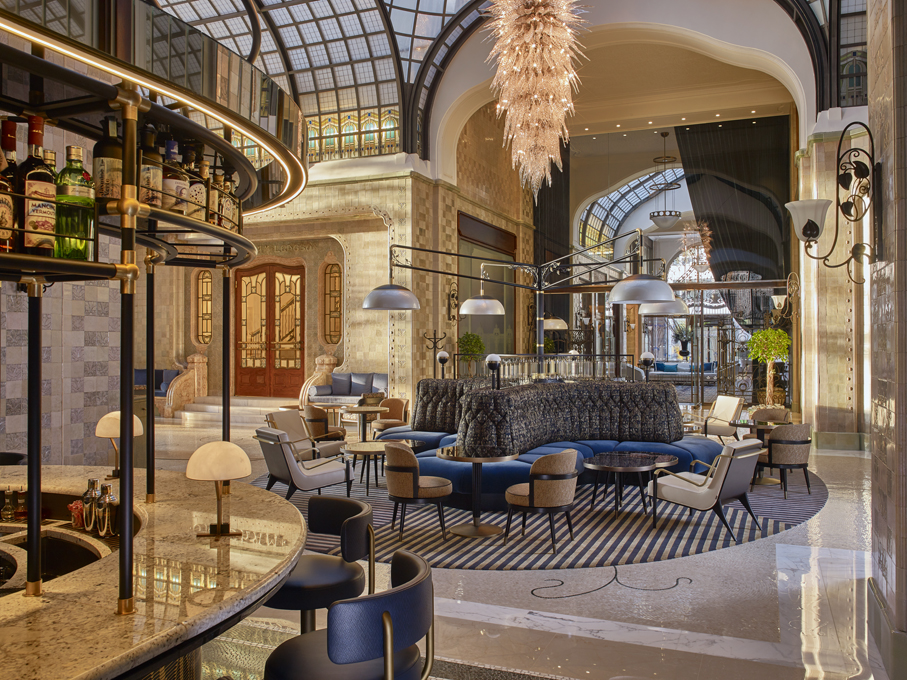 We are proud to announce the completion of Múzsa at Four Seasons Gresham Palace, Budapest – following recent renovations of guest rooms and meeting spaces. This marks Richmond’s latest collaboration with the hotel, having overseen its original design over 16 years ago.

Occupying what was previously an open plan lobby area, Múzsa epitomises the evolution of the hotel lobby. An iconic design undertaking of its time by our Studio Team, the original lobby space at Gresham Palace was a true masterpiece, showcasing grand design and celebrating local craft. Originally built in 1906 as a residence for British aristocracy before undergoing a hotel restoration in 2004, it was restored during a period where public spaces in hotels aspired to be more reverential than multi-functional; extravagant passing spaces which provided little more than sights to behold.

Today, the hotel lobby is no longer a space that guests merely pass through. It assumes a more purposeful role, providing room to work, hold meetings, socialise or simply unwind. These once communal spaces have become highly sought-after, providing valuable services for guests and creating additional functionality and revenue for hotels, through thoughtfully executed design.

Imbuing the glamour and elegance of Budapest’s golden age, Múzsa introduces a new lobby lounge concept to Four Seasons Gresham Palace, fusing the building’s rich past with the needs of today’s sophisticated clientele. This new offering reflects a bold departure from the historic trend of single use design, in favour of versatility and flexibility. The result is space that is convivial in nature and welcomes social interaction, offering a main reception, private concierge club, multiple meetings rooms, a tasting room and expansive bar areas.

The journey through Múzsa was considered in meticulous detail, with each moment offering a distinctly different mise-en-scène which surprises and delights. A deep reverence for the heritage of the building saw our design adopt a modern, yet sympathetic take on Secessionist interior motifs and colour combinations, seamlessly blending past, present, and future to create one timeless experience.

Upon entering the building, guests are welcomed into the lobby lounge with banquette seating to create a social hub within the bar area, designed for guests to meet and relax throughout the day, and into the evening. It features peacock fabric with deep seaming and beautifully detailed screening sections. Large golden lampshades by Solinfo Lighting & Home hang over the banquette, showcasing a bass relief pattern which subtly replicates architectural tiling details on the walls.

A main concierge library area captures the splendour of the building, with two discreet meeting rooms and a tasting room creating additional intimate spaces for guests to use and enjoy. Warm-toned mosaic walls, statement lighting and striking artwork come together to create atmosphere and drama, whilst providing comfort for work and play.

In the bar area, which seats 130, a raised platform for live performances takes centre stage. Wrapped in bespoke artistic fabric by Rima and McRae, this hero feature is an ode to the luxury of traditional Budapest hotel bars of the 1910s and evokes a strong sense of theatre and dynamism to the space. Another key feature in this space is the bar fixture, adorned with a mirrored finish and intricate patterning. It’s circular shape and transparency allow guests to seamlessly walk around it, see through it and enjoy cocktails at the counter with an energetic ambiance.

Through the years, Gresham Palace has lived many lives. It was originally designed as a residence for British aristocracy before later being badly damaged during the war and Soviet era. Beyond this, the landmark building was also home to a shopping arcade before being converted to a Four Seasons Hotel in 1999.

Fiona Thompson, Principal at Richmond International said, “This was a project that was hugely important to the team. When we first saw the hotel and then completed the restoration over 16 years ago, we fell in love with the building. We’re really proud to be a part of the evolution of Gresham Palace and to see that it remains such a significant piece of architecture in Budapest today.”