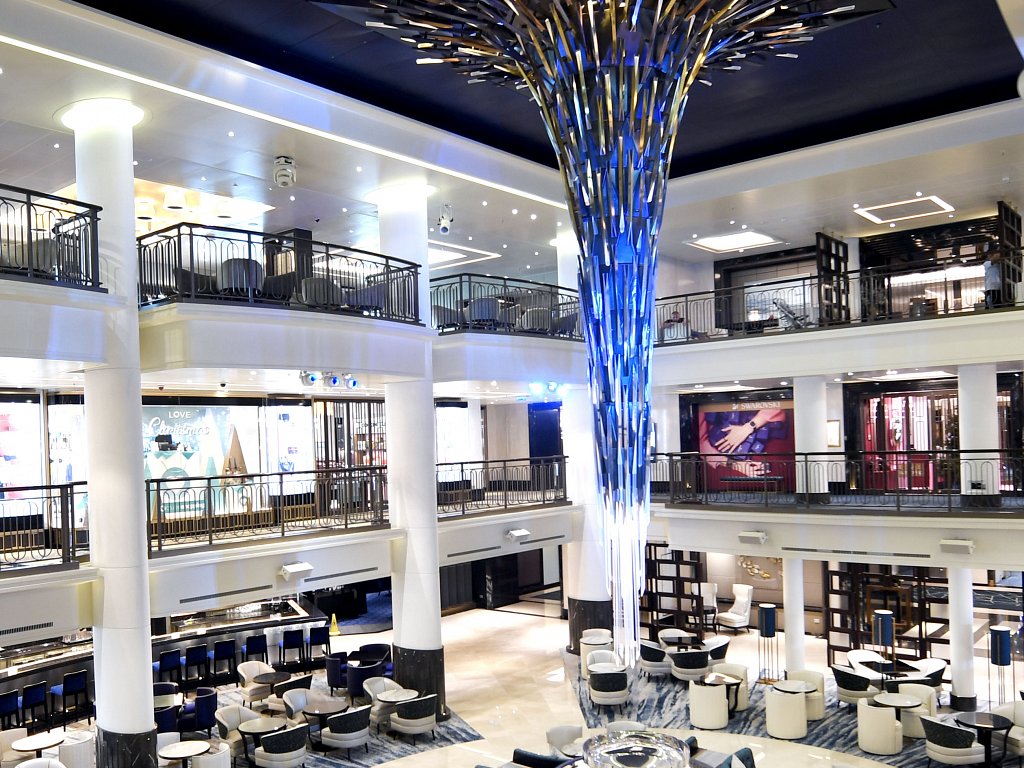 Here at Richmond International we have a long history of designing the interiors of some of the world’s most prestigious hotels, but P&O Britannia was our first entire-ship project as a studio.

As part of the overall project, we were asked to create a “wow moment” in P&O Britannia’s atrium – the central hub and beating heart of the ship. While this may have sounded like a broad brief to many, this gave us a really unique opportunity to challenge ourselves as a studio and push the boundaries of cruise ship design.

Fully embracing the opportunity, our team with collaboration from Hoad & More designed and managed both the production and installation of the remarkable Starburst chandelier, which is now widely recognised as not just a stunning design statement but also the focal point of this flagship vessel.

We are looking back at one of our proudest achievements and how we created this striking lighting piece.

We knew that the atrium is typically a hub that other spaces connect to, and a central heart for guests to either enjoy a cup of coffee or glass of wine; it’s the focus for discovering other areas of the ship.

We also knew that maritime navigation was an important theme that we could incorporate into the concept. There was plenty of inspiration from traditional ship navigation, the sun, stars and the night sky has guided voyagers for generations. This inspired us to think about the Big Bang and star explosions, which ultimately gave us the idea behind the Starburst chandelier exploding from the ceiling of the Atrium.

Our final design not only represents the traditional navigation but by being located in the heart of the ship also helps guide passengers and helps orientate them to their surroundings. 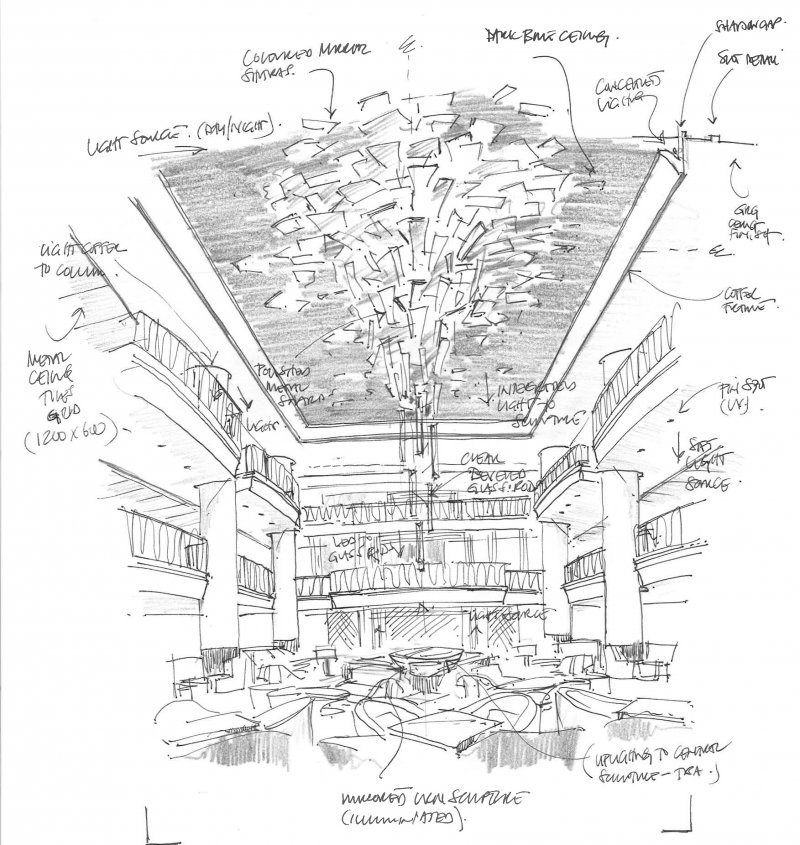 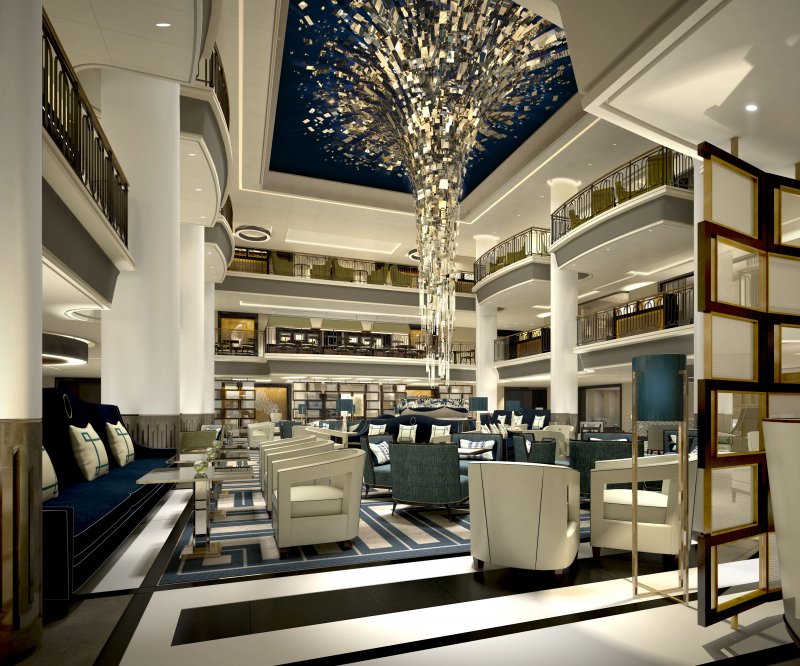 Taking the design from concept to reality, particularly for the manufacturing and installation of the piece, needed specialist expertise so we called on Hoad & More, a fantastic bespoke lighting studio and a trusted partner that we’ve worked with many times over the years.

Working in collaboration with Hoad & More, our design quickly developed from the initial idea into the sophisticated yet simplified form. They also worked closely with their engineers for a number of months to ensure the chandelier would be structurally stable as the structure needed to be constructed in such a way as to counter the frequency of the motor and neutralise any vibrations. They developed the design while maintaining the sophistication and elegance that was vital to our conceptual vision. 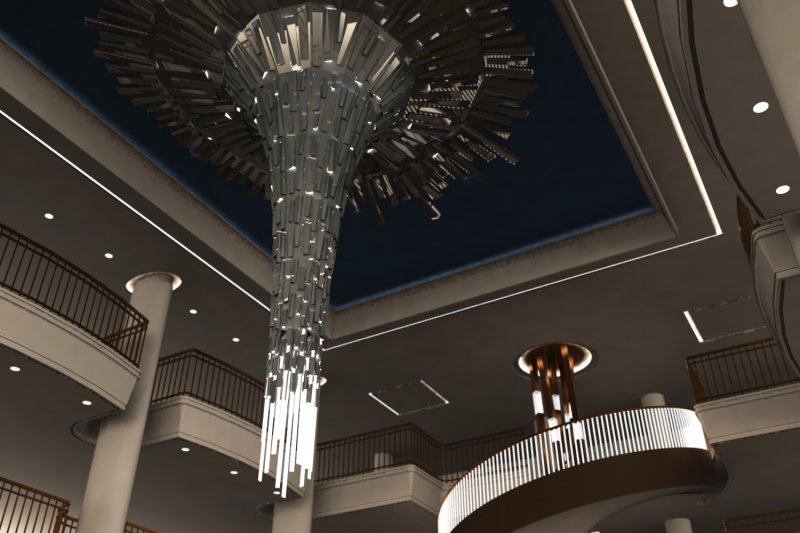 It was now time to produce the additional elements that would bring the Starburst spectacle to life!

For us the real joy of this project, and what we believe has ultimately made it so successful, was the opportunity to work with Hoad & More who handpick and collaborate with specialist manufacturers from all corners of the UK and have longstanding working relationships with highly-skilled craftspeople.

In the design for the Starburst, we wanted to create a sense of wonderment, depth and contrast that would catch the eye and hold attention. With each material, whether it be metallic, mirror or cast acrylic, there were a variety of textures, including brushed, frosted and polished finishes, to create intrigue.

As impressive as the chandelier was at this stage, we knew there was still something missing… we needed the Starburst to become a theatrical statement.

To create further drama, an integrated flexible lighting system was added that could be programmed to burst into colour and change effects to mark special occasions (Christmas and Chinese New Yew Year), the time of day (midnight), as well as geographical milestones (passing over the equator).

The moment we first saw the lighting in action within the full size mock up section is a day we’ll never forget in this process. The Starburst came to life, developing its own personality which created a lasting impression… a true “wow moment”.

After a complex and successful on board installation, we needed to make sure the Starburst sculpture was completely secure and safe. Sea trials were conducted, without passengers on board, to allow us to monitor the movement of the chandelier – it passed with flying colours! 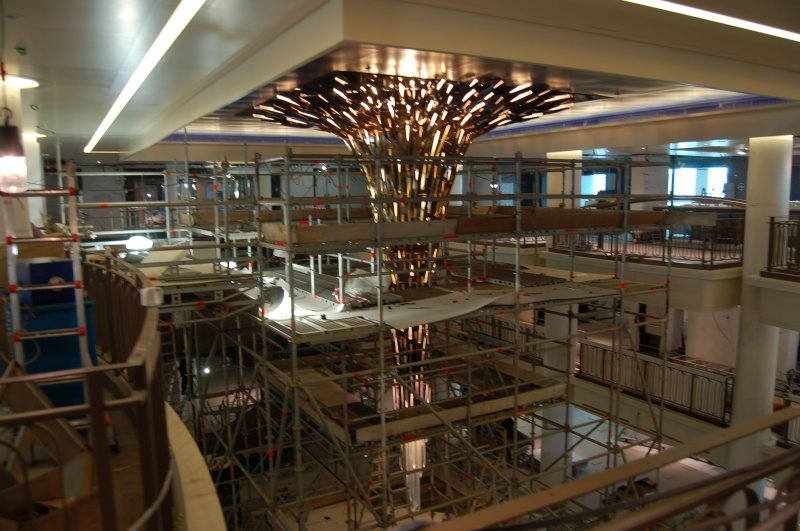 Our creation of the ‘sophisticated WOW’. the meeting point, the official photo background for onboard events and a popular social media shot; the Starburst chandelier is now the design spectacle and the main focal point for P&O Britannia.

The installation now attracts customers into the atrium, helps drive revenue in the cafés, bars and shops in the space, and generates interest and wider exposure for the brand.

Creating and manufacturing a structure on this scale, with the added obstacle of its installation onboard a cruise ship, was a completely new and hugely ambitious challenge for the full collaborative design team – which made the Starburst sculpture all the more rewarding! 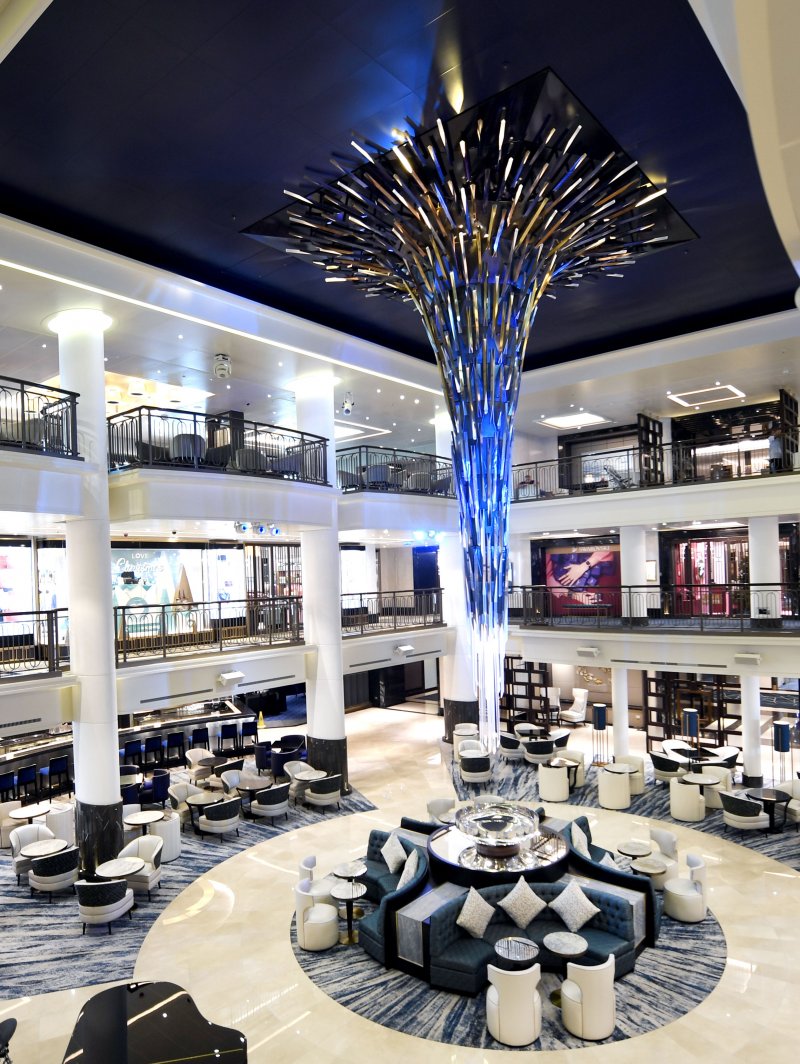